Poll: Have Americans Lost Their Sense of Individual Responsibility? 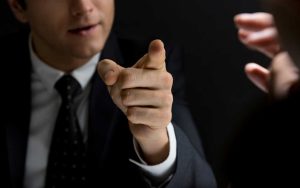 America was founded with an unprecedented vision in mind: to make a new life and be free in uncharted lands. The amount of integrity and responsibility our initial settlers and founding fathers had was incredible. Now, it seems like the notions of personal responsibility and accountability are fading away as we grow accustomed to luxury and creature comforts.

Do you think Americans are losing sight of what personal accountability really means?

The Silent Generation who faced the horrors of The Great Depression and World War II knew better than any of us what it meant to be responsible. They overcame impossible odds to survive a failed economy and defeat evil in Europe and Asia. To them, personal accountability entailed putting their lives on the line with every action and decision they made.

Now, with the development of technology and a changed political climate, we spend less time fearing for our lives and the fate of the world. The Baby Boomers, in particular, benefitted from unprecedented quality of life improvements. Almost everything was taken care for them by their parents, which opened up opportunities to do almost anything they dreamed of.

So, why is it that subsequent generations (especially Millennials) are always looking for something or someone to blame for their circumstances? The internet changed the entire world, but they’re worried about finding their perfect dream job straight out of college. They can talk to anyone, anywhere, at any time, yet they complain about being alone.

What happened to doing something to fix your situation? It’s common to hear “I don’t have the time, money, or energy to start a business” from people who spend their free time binge-watching television shows. “I never got a fair shot in life” is a common complaint from a Millennial who chooses to work at a restaurant job they don’t like.

Many in the younger generations like to blame anyone or anything but themselves for their problems. Meanwhile, they’ll vote for politicians that promise the world so they don’t have to lift a finger — not realizing these programs have to be paid for somehow. Or worse yet, they won’t vote at all and then complain when they don’t like the election’s outcome.

Poll: Have Americans Lost Their Sense of Individual Responsibility?

Do you believe modern Americans are too soft to hold themselves accountable for their actions? Tell us what you think in the comments below. Let everyone know if you think there are people pulling themselves up by their bootstraps or not.

(Liberty Bell) – For months, Democratic politicians have been urgently warning us to socially distance. They have wanted us to remain at home, with ...Read More

The Complete About-Face Democrat Leaders Have Done On “Social Distancing”…Did You Notice?

(Liberty Bell) – There’s never been a time that our nation has more sorely needed unity. This year has been devastating for national morale. We beg ...Read More

(Liberty Bell) – As cities across America erupted in riots and looting in response to the killing of George Floyd at the hands of a Minneapolis pol ...Read More

Watch: Harrowing Footage Of Protests Outside White House Which Led To Lockdown

(Liberty Bell) – President Donald Trump’s first term will go down in history as one that witnessed the deepest degree of corruption coming out of W ...Read More

Powell Explains Exactly Why The FBI, DOJ Had “No Reason Whatsoever” To Investigate General Flynn

(Liberty Bell) – There’s something the Democrats and the mainstream media want you to know about George Floyd’s death. Virtually everyone, regardle ...Read More

Watch: Trump Powerfully Denounced George Floyd Killing, So Why Did Maxine Waters Say This? So Shameful…