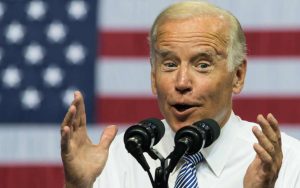 (RightWIng.org) – Now that President Trump has been acquitted of all impeachment charges, we can finally move on as a country.

Part of the process includes dealing with the political ramifications of what happened during the Senate impeachment trial. One of the more heated moments included Sen. Joni Ernst (R-IA) saying that Joe Biden would be impeached by Republicans if he were to be elected president.

Ernst believes that the idea of impeaching a president for “whatever” has now become a Congressional precedent. Never before have such vague charges been levied against someone sitting in the highest seat of power in the land. Now that Democrats have followed through with that conviction, it could haunt every successive president that wins the national election.

Ernst clarified her point during a statement to Bloomberg News.

“Joe Biden should be very careful what he’s asking for because, you know, we can have a situation where if it should ever be President Biden, that immediately, people, right the day after he would be elected would be saying, ‘Well, we’re going to impeach him.’”

He believes that Biden could very well be impeached for his assignment of battling Ukrainian corruption, yet turning a blind eye to Burisma, a natural gas company, as his son, Hunter Biden, earned a substantial salary sitting on the board of directors.

At the time, VP Biden was leading this charge against corruption during the Obama administration to remove Viktor Shokin, Ukraine’s prosecutor general, from office. Currently, there are unverified claims that he had threatened to hold $1 billion in aid if Shokin was not removed from his post.

Coincidentally, that’s what Trump was impeached for as well.

Eventually, Shokin, who was investigating Burisma when Hunter was on the board, was excised from his position of power.

Still, even though Biden might be impeached over this situation, the question of what Republicans would actually do is up in the air.

While far from a supermajority, the final Senate impeachment votes were nearly split 50/50 with Republicans beating out Dems by only a couple of points. Given the highly partisan nature of the entire impeachment proceeding, a few members on both sides of the aisle had their convictions challenged.

Ultimately, only one, Sen. Mitt Romney (R-UT), broke away from toeing the party line. Other Republicans, like Sen. Lisa Murkowski (R-AK), voted in Trump’s favor while condemning his actions.

So, do you think Republicans would really follow through with impeaching Joe Biden if he were to win the presidential election this November?